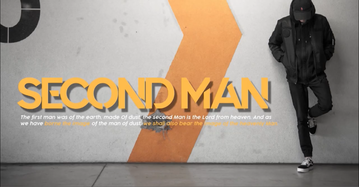 Second Man is a bible study and sermon series birthed out of teaching the Adullam Project a Christian Discipleship home for Men (a Ministry of the Rock Christian Fellowship in Espanola, NM). Second Man sermons series has been a Christian discipleship lesson plan designed for biblical leadership and transformation of Christian men, its biblical principles have been taught and created by Pastor Danny Arellano. The Foundation scriptures have been Romans 8:29   ”For whom He foreknew, He also predestined to be conformed to the image of His Son, that He might be the firstborn among many brethren. Moreover whom He predestined, these He also called; whom He called, these He also justified; and whom He justified, these He also glorified.”

The purpose of the Second Man series is to bring men to a mature walk and relationship with Christ, we began on learning the basic fundamentals of becoming a new creature in Christ Jesus. By Christian men submitting to the Lordship of Jesus Christ, they are transformed and conformed into the Imago Dei, the Image of God that was His intent from the very beginning of His creation.

Second Man through Son Broadcasting ministry will be made available to the New Mexico Department of Corrections for the purpose of Christian Discipleship of men in prisons. Since the wide spread of COVID 19 in March of 2020 there has been a complete closure of institutions where inmates are being detained in New Mexico Prisons, television is still an avenue that is open and accessible to many inmates in Prisons. Inmates in higher risk facilities that are confined to their cells have their own individual Televisions and most inmates in lower classified prisons have their own TV’s in their bunk houses or in a dormitory where a group can view Son Broadcast and also a DVD of our Services and Christian Lessons provided. Chaplains in New Mexico Prisons are asking for resources for inmates in New Mexico. My vision is to make Second Man Sermon series available to Chaplains on DVD format for viewing in Chapel Services and Educational schedules throughout the prisons in New Mexico. Like no other time in history has there been an unprecedented call to action for ministry on demand via video, TV and local radio broadcast. Many churches have adapted well at reaching their congregation via Facebook and live video feeds, but this doesn’t reach prisons where there is no presence of social media.
As a Husband, Father and Pastor I am hopeful for the opportunity that reaching young men in prisons is a Kingdom Harvest vision for these last days. Thank you for your sensitivity and vision.
The great Apostle Paul in Ephesians 4 opens with, “I, therefore, the prisoner of the Lord, beseech you to walk worthy of the calling with which you were called,” from a prison cell he is calling on the church to walk worthy, to walk in unity and to be built up in the faith. Verses -13 he continues,  “And He Himself gave some to be apostles, some prophets, some evangelists, and some pastors and teachers, for the equipping of the saints for the work of ministry, for the edifying of the body of Christ, till we all come to the unity of the faith and of the knowledge of the Son of God, to a perfect man, to the measure of the stature of the fullness of Christ;”
Men in prisons have been told they are out of reach, have never matured and are not of use. Second Man will rescind that erroneous lie, we will strive to restore these men, they are a part of the Body of Christ. In all of New Mexico’s prisons there are bible study leaders, worship leaders and evangelist who are assigned to the darkest places in our state, Second Man will come along side them and further equip them and offer encouragement to build up their faith and to become mature men. I am honored to partner and to dedicate myself to the work of the ministry in this endeavor, I am grateful to the ministry of KCHF that is willing to open its studios at time such as this.
Pastor Danny Arellano